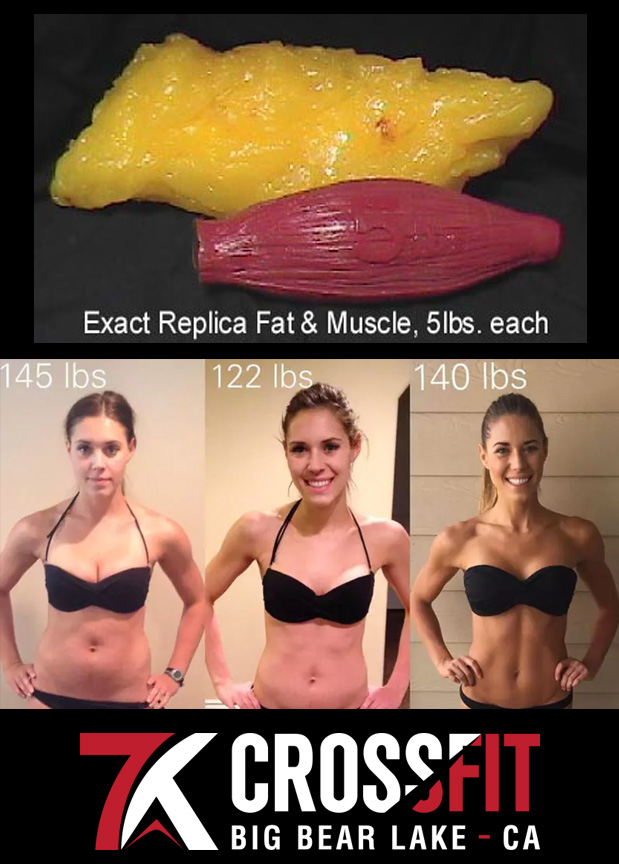 One thing we get asked a lot by the women who are looking into starting CrossFit is, “Does CrossFit make me “bulky”?”

That question comes up from a lot of girls that are curious about CrossFit. My initial reaction is to shake my head and internally think of the realistic CrossFit girls body type of years experienced and seen – most of whom are NOT bulked up, but with lean muscle definition and healthy body fat percentage.

Definitions and Misconceptions:
To begin, we need to address some misconceptions about how the body works…
You cannot “tone” a certain portion of your body. Your body will not lose fat in one spot at a time, it will only lose fat. Thus, you must reduce your overall body fat percentage to see results in the area you want. This is why the “ab-(insert attention-grabbing verb)” you see on TV won’t work to help you get a better midsection.
Lean – having little to no surplus fat – Thus, to look “lean”, you need to have low levels of body fat.
Toned – seeing muscle definition on a human body – Thus, to look “toned”, you need to have low levels of body fat combined with having enough muscular development that you can see the shape of the muscle under the skin. This is usually accomplished at below 20% body fat on women, and below 10% on men.
You will never “bulk up” overnight, except from maybe an ice cream and beer binge (guilty). You will never wake up one morning, look in the mirror, and realize that you just built bulky muscles in your sleep.

First, I want to establish that having muscle doesn’t mean being bulky…
The first thing you need to do is compare these two women: 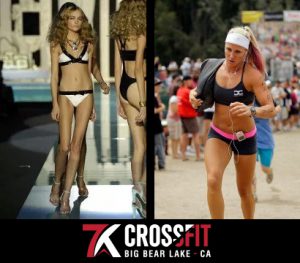 For reference, the girl on the left is a runway model and the girl on the right is an elite CrossFit athlete. Both have approximately 12-15% body fat. Both are doing something they love, and the bodies they have created help them do that.

On the left, we have a runway model who has almost zero muscular development while also having almost zero fat deposits. She has enough essential muscle to not fall over walking, but not much more. If you want to look like the woman on the left, sorry, but we cannot help you get there. Although, if you have an apple and a cigarette a day for about a year, you could get close.

The female on the right has spent years developing her strength and muscle. She has battled heavy weights and pushed herself to the limit to squat, deadlift, and lunge heavier weights every time she comes into the gym. She weighs approximately 35-40 lbs more than the runway model due to the large amount of muscle that she has acquired. She is likely approaching her genetic limits in the amount of muscle she can develop without going on a bodybuilding routine. Between her and the runway model, there is likely very little difference genetically, yet there is a huge difference in training and diet (more on this shortly). 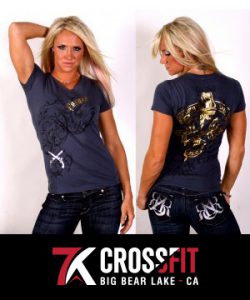 Same elite CrossFitter, now dressed up, still bulky??
Thus, you can have a large amount of muscle without ever looking “bulky”. Don’t you agree??

Now that we know that muscle doesn’t make you “bulky”, what does??
Well, the answer is fat. Excess adipose tissue will result in less than satisfactory aesthetics. This is regardless of the amount of muscle you have. This is easily seen in the image below: 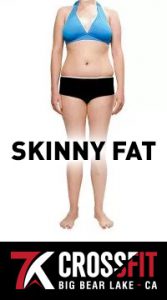 She has a large amount of fat, while having a very small amount of muscle. This is described in the fitness community as “skinny fat”. While not overly “bulky” she doesn’t have the aesthetics that most of us work so hard to attain. The woman in this image is likely at a level close to 30% body fat and likely has a similar amount of muscle as the runway model. So even though she may look fine wearing a sweater, it is a different story at the beach.

The trick is how to fix this. Well, option 1 is to eat less and do tons of cardio, surviving on a diet heavy with running and light on food, and you will end up looking more like the runway model above. Option 2 is to develop muscle to burn away the excess fat while doing cardio, resulting in looking more like the elite CrossFitter above.

Ok, so we have started to establish that building muscle isn’t a bad thing, right?? Yet, you are afraid that by squatting and deadlifting, you are making your legs and butt bigger, thus getting more “bulky”, correct??

Here is the kicker, the reason your legs (and shoulders and arms and back) are getting a little bigger is that you have now started to add some muscle to them. Now, that muscle will burn more calories, starting to help whittle away at the amount of fat you have on your body, even while you sleep. You now are able to achieve that “lean” and “toned” look, as your body fat levels have decreased, and your muscle is starting to show, giving the “toned” look.

Bad cardio and worse cardio…
Some people keep saying to be leaner they just need more cardio and less strength. Well, yes, if you just do “more cardio”, you will lose more fat, but you would also lose muscle because without strength training, your body burns muscle as well as fat. So, instead of looking more like a Victoria Secret model, you start to look more like a runway model. Then, once you stop doing “more cardio” you will gain fat even faster now that you don’t have the muscle to burn the extra calories, resulting in the “skinny fat” look. You can see this in ex-athletes that have tried to “get leaner” by doing “more cardio” only to result in having more fat with less muscle. 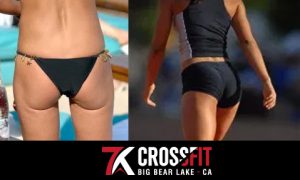 Skinny vs Strong
This can also happens as we age, as the muscle we built by running, jumping, and playing in our childhood and teens atrophies due to under-use with a more sedentary life, so people in their early twenties are seen as having “high metabolisms”, supposedly not having to work to maintain lean body shapes. This “high metabolism” is because the muscle they built in their teen years is burning excess calories and fat, and with the low body fat levels, you can see their “toned” muscle underneath. However, as they take day jobs and do not stimulate their bodies, their muscles atrophy, burning less calories and thereby lowering their “high metabolism” and leading to increased body fat as they age. Usually, people try to do “more cardio” to regain their lean, toned bodies that they had when they were younger. However, since they do nothing to build new muscle or maintain their current muscle, they slowly transition to a thin, but “skinny fat”, look as they age.

Lastly, you will never be able to create muscles like a man lifting weights. 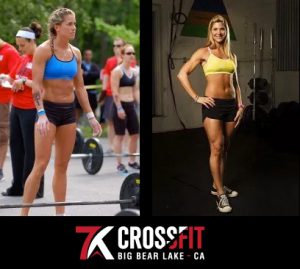 A WOMEN THAT LOOKS LIKE SHE HAS MUSCLES LIKE A MAN HAS LIKELY TAKEN STEROIDS!! This is the defined truth, a woman’s muscle development is much different than a man’s. Unless a woman has a very different genetic make-up (a very, very small portion of the population), or does bodybuilding type workouts, specifically designed to increase the size of the muscles, it is almost impossible to build muscle like a man. (And, as much as you might think it is true, you only have a 1 in a million chance of being the 1 in a million that has the different genetics, so stop saying, and believing, it) This is because males have 20-30 times the testosterone of women, resulting in deeper voices, more body hair, and more muscle development. Women just physically cannot build muscle like men can, sorry but it is a scientific fact. Some of the maximal amounts of muscle you can put on a female frame with CrossFit training can be seen below. These are women that built their bodies using sports and strength training.

An extremely high level of muscle on a female will look like this picture, but again, only with many YEARS of weights training and a focus on a clean diet.
So, lastly, just to clarify, “bulky” means fat. Which does not happen when you work hard at CrossFit.
If you are looking for an effective training program, with a clear diet prescription that will allow you to become healthier, more capable of anything you need your body to do whoever you are, whatever that ‘anything’ may be. Moving better, getting leaner and stronger, with better muscular/cardiovascular endurance and being better at everything. Effective weight training and liftng barbells as a woman will not mean you gain huge amounts of muscle mass. If you could, every man who went to gym a few times a week would be a HULK as a result of their much higher levels of testosterone!!

There are no quick fixes (shake weight/ab cradle/Davinas wobble board/6 minute abs/crosstrainer, reclined bike in front of TV set/insert your own fitness scam, moneymaking promotion here….). Being muscular as a woman means you will look toned as it will help you shed the layer of fat that is covering up your muscles, creating a better shaped you. As you’ll see from a google search of 5pounds of muscle vs 5lb of fat! 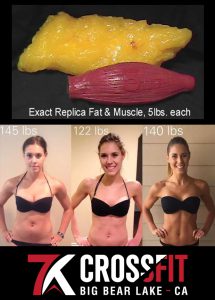 An effective training program (CrossFit being more effective than any other) and a healthy diet such as the Paleo Diet, not the prescribed but outdated ’modern?!’ High carb(wheat/grain), moderate protein low fat ‘Healthy’ Diet. or as is the case for most in ‘developed countries’ especially ours! Eating bad food regularly and drinking lots of alcohol is only sending you on a one way road to ill health and obesity.

Thank you CrossFit Quality for the info!

Connect with Andy Meadors for questions: